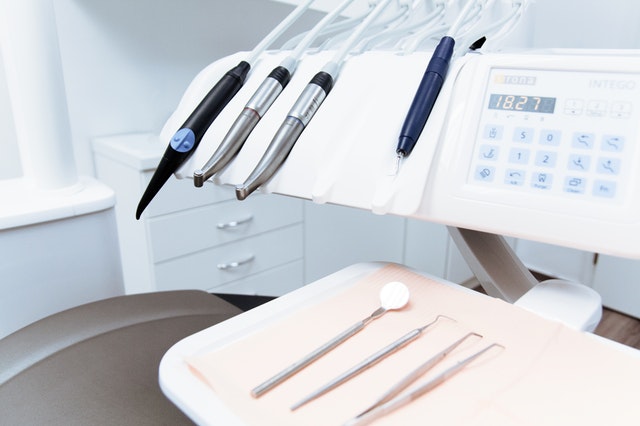 The Indus Valley Civilization has yielded evidence of dentistry being practiced as far back as 7000 BC. This earliest form of dentistry involved curing tooth related disorders with bow drills operated, perhaps, by skilled bead craftsmen. The reconstruction of this ancient form of dentistry showed that the methods used were reliable and effective. Cavities of 3.5 mm depth with concentric groovings indicate use of a drill tool. The age of the teeth has been estimated at 9000 years. In later times, mechanical hand drills were used.

The modern incarnation of the dental drill is the air turbine (or air rotor) handpiece, developed by John Patrick Walsh (later knighted) and members of the staff of the Dominion Physical Laboratory (DPL) Wellington, New Zealand. The first official application for a provisional patent for the handpiece was granted in October 1949. This handpiece was driven by compressed air. The final model is held by the Commonwealth Inventions development Board in Canada.

A dental drill or dentist’s drill is a small, high-speed drill used during dental procedures, usually to remove decay and shape tooth structure prior to the insertion of a filling or crown. A dental drill may also be used in the cleaning and shaping of root canals during endodontic treatment, or to remove old or temporary fillings or crowns prior to the insertion of new or permanent restorations. The term “dental drill” is considered the more colloquial form of the term “dental handpiece,” although it can also be construed as to include the power source for one or more handpieces, a “dental engine.” “Handpiece” and “engine” are more generic and euphemistic terms for generic dental tools.

Modern dental drills can rotate at up to 400,000 rpm, and generally use hard metal alloy bits known as burrs. Dental burrs come in a great variety of shapes designed for specific applications. They are often made of steel with a tungsten carbide coating, or of tungsten carbide entirely. The burr may also have a diamond coating.

Dental drills, which have a distinctive, shrill sound, are often a prominent factor in many people’s fear of dentistry.

Don’t worry! come on, speak with your dentist at Unicare dental Center, breath deeply, relax your muscles and think positive! Just have to open wide, we can help you to do it!

Give us a call: